After 904 agonizing days, Isaac had completed his journey back to the floor, so his teammates greeted him in the locker room with a water bottle shower to wash away the pain of the past, to awaken him to his new reality.

go inside the locker room after the dub in @JJudahIsaac‘s return 🪄 pic.twitter.com/IshGyUOnFs

Isaac is an NBA player once again, a promising 25-year-old athlete and man whose torn ACL no longer can keep him from doing what he was promised.

The hundreds of bad days; the hundreds of good days; the purple people eaters, as he called the training staff; the teammates; the family; the church; the faith. His entire support system that propped him up when it was easy to truly fall down, that tangled maze of love was front and center in his mind as he stepped onto the court for the first time in over two years.

“So just trying to bottle all that up in one moment, it was surreal,” Isaac said after the Magic beat the Celtics 113-98.

His presence on this stage was surreal. Isaac’s faith that he could return wavered over a vast span, but it never faltered.

Those who were in the trenches with him, the trainers who conducted his rehab, the teammates who were stuck in the same predicament, they were all blown away by his steadiness.

Rehab is not easy. Markelle Fultz said the hardest part is the monotonous repetitiveness, the micro-progress it yields, and having to tell yourself something promising is happening that you can barely perceive. But Isaac was there to promise him it was going to be OK.

“Somebody was rehabbing alongside me and (I said), ‘Whenever it gets tough, whenever you feel like you want to quit, just look at me,’” said Isaac. “I’ve been on this road awhile and they would even say that themselves, like, ‘I have no room to complain because of JI.’”

Fultz was stuck there alongside him. Taken first in the same draft, Fultz hardly got to build a career before a torn ACL robbed him of his success.

“We were out for, shoot, a year together. Just seeing somebody who went through the same injury I had and be able to persevere and come back (was inspiring),” Fultz told The Athletic. “But to go through similar things and be there in the gym with him, literally worked on our rehab together along the road, we had another special bond as far as understanding.”

Fultz pointed out that Isaac had a solid year on him by the time Fultz tore his knee and had to join him in rehab, but it wasn’t like this was the first time Fultz’s body kept him off the floor. Shoulder issues completely derailed his time in Philadelphia and immediately ruined his status as the top pick in the draft.

The Sixers traded him to Orlando, where he quietly brought his career back on track. Then he blew out his knee and all that progress was wiped away.

“I understand the frustration of having to take it day-by-day and wanting to play and figuring out when it’s time to go,” said Fultz. “I’m just super excited for him to make it to this day to put on the uniform, be able to go out there and step in to play the game he loves. I know how much work he put in.”

Isaac has been a guide for those passing him on the road to recovery, showing them how the work is done and the mental battle is won.

When Gary Harris needed meniscus surgery just before training camp this season, he was sequestered to rehab alongside Isaac. He never got to play with Isaac before Monday night, so this was his chance to witness Isaac up close.

“Just seeing all the countless hours he’s put in, just the amount of patience he’s had with the whole process, has been inspirational,” Harris told The Athletic. “To see someone who’s been through a lot, it’s not easy for him to keep fighting, keep pushing. To get to this point two years down the road, some people can’t even look down far enough to watch it play out. For him to even still be here, coming in with a smile on his face every day, and make this possible is inspirational, man.”

His faith and perseverance radiate out to those around him. But his injury was proof that even the greatest athletes are imperfect. There had to be some creeping doubt, those moments when even the man who said he was made to play basketball wondered if he could fulfill his destiny.

“I’ll be lying to you if I said I didn’t,” Isaac said. “Coming back from an injury like this and taking as long as it did, there were days where I was like, ‘I don’t know if I can keep going.’”

But he believed God had him on this journey for a purpose and he was going to keep working. It was at this moment he once again thanked that aforementioned list of people who held him down while he was fighting to get back up.

“(They) continue to speak life and encouragement in me to continue through the process, no matter what anybody was saying,” Isaac said. “I have to just continue to look within and lean on those people.”

Now those people can finally lean on him. The first drawn-up play of Isaac’s night culminated with him burying a turnaround jumper over Jaylen Brown, sort of as designed.

“Shout out to Coach Mose for drawing one up for me,” Isaac said, explaining it was supposed to be a catch-and-shoot jumper but the Celtics forced him to go into isolation.

“Well, I was so glad I made that turnaround. I really was like, ‘Oh, thank you lord!’” Isaac laughed. “I got that to go down. Then that first wind got me. That last minute, I could barely talk I was breathing so hard.”

By the time he came back in for his ultimate four-minute stint in the third quarter, he started to relax and just felt good. “I (was) saying, ‘I’m gonna let it go.’”

But Isaac knew that every missed shot or strained breath was an accomplishment in itself. He remembered where he came from at the nadir of this journey. The moment he tore his knee in the NBA’s COVID bubble on Aug. 3, 2020, that wasn’t quite it.

There was the cruelty of suffering a setback just hours after the team announced last March he would be out for the remainder of the season and specifically mentioned there were no setbacks. A hamstring strain and a minor surgery, pushing his hopeful return to the start of this season. He didn’t make it back until more than the halfway point, but nobody seemed to care on Monday.

He was out there doing his thing, everything short of throwing it down over an unlucky defender. Don’t worry though, he’s been working on that plenty behind the scenes.

“He’s been trying to dunk everything, but I don’t think he’s dunked on anyone on practice yet,” Bamba said. “But I’m sure as soon as he gets his footing down, he’ll be back at his own antics.”

Isaac has been playing the five at times in practice, according to Bamba, as if he needs even more competition at his position. They just wanted him to be himself again, but there is more to Isaac ahead. It just may not be ready yet.

But Bamba is abundantly optimistic, considering his pre-game prediction for his teammate’s box score even though he knew Isaac was barely going to play.

Tatum, who was taken three spots ahead of Isaac in 2017, wasn’t just happy for Isaac. Just like Fultz told The Athletic, taken two spots ahead of Tatum and effectively traded for him that same year, he was “super, super happy for (Isaac).”

While Isaac and Fultz have tried to get their once promising careers back on track, Tatum has had a meteoric rise to stardom and transformed his team into a serious contender. So he can merely sympathize with all the long nights Isaac had to deal with trying to get his body right.

“Two years is a long time not to play basketball. I can’t even imagine,” Tatum said. “Just to see him check in, see the reception he got from the crowd, I was really happy for him.”

Jonathan Isaac checks into his first NBA game in over two years pic.twitter.com/jvoXDHA1A4

It was only fitting that Isaac’s first task in his return was to walk up to Tatum and try to strap him up. Most players wouldn’t be given such a tall task so soon, but it was easy for Jamahl Mosley to trust Isaac with the assignment.

“Because that’s who he is,” Mosley said. “He talks about it all the time and who he is, his faith and his work ethic. Before going down to his defensive level, IQ, toughness, he’s a special defender and obviously, he’s adding those pieces offensively. But he’s shown what he’s capable of doing, so I’m not afraid to do that in that moment.”

This night started as a moral victory, but there was a team on the other side trying to spoil that. It’s not that they want to ruin the good vibes, but the NBA doesn’t take more than a brief moment to let you find your footing.

It’s why Isaac had to wait so long to come back. Hit the ground running or be run over.

“The league can be unforgiving, guys with injuries go through ups and downs,” Joe Mazzulla said. “For him to battle through over the last two years and mentally and physically work at it each day, that’s a win.”

So to be thrown in the fire covering Tatum, or for Mosley to call the first play for Isaac, the Magic had full faith in him. He delivered and helped Orlando blow the game open when he came in during the third quarter, doing just about everything that once made him the future of this team and this league before he had to start a new, more treacherous journey. 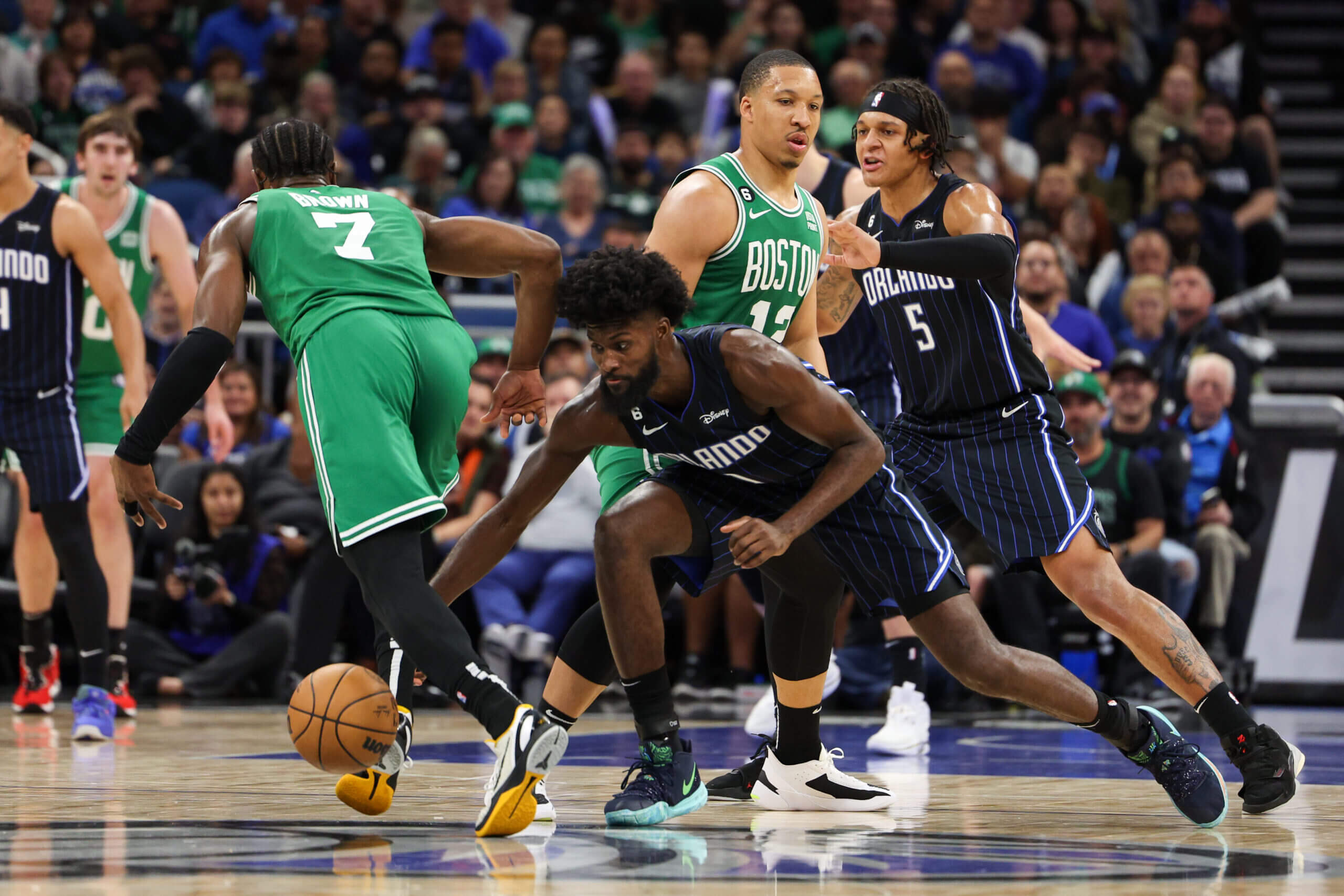 “This night could have gone so many ways and for it to go the way it did, I appreciate Him for it,” Isaac said. “So there’s a peace, a relief to it. So let’s keep it going.”

An NBA game is a hectic cacophony of excitement, anger and sometimes pain. But after so many years on the sidelines, in the dungeons of rehab, Isaac is finally back in his peaceful place where he belongs.