Delphi murder suspect Richard Allen has arrived at an Indiana court as a judge is set to consider releasing his arrest affidavit – as the mother of one of his alleged victims begs for it to remain sealed.

Allen, 50, was given court-appointed lawyers after sending a handwritten letter to the court asking for representation last week.

His lawyers have since filed a request for Allen to be released without posting bond or by setting a ‘reasonable bail amount’.

Currently the only details that have been released are that Allen’s initial bail was set at $20million following his arrest, though he is reportedly now being held without bond.

Allen is accused of murdering both Libby German, 14, and her friend Abigail Williams, 13, as they hiked a trail in Delphi, Indiana, in February 2017.

He has pleaded not guilty to both counts of murder, and prosecutors have sealed his arrest warrant from being accessed by the public.

Carroll County prosecutors requested that the court records be sealed, with a judge today set to decide if it should be handed over to the public. 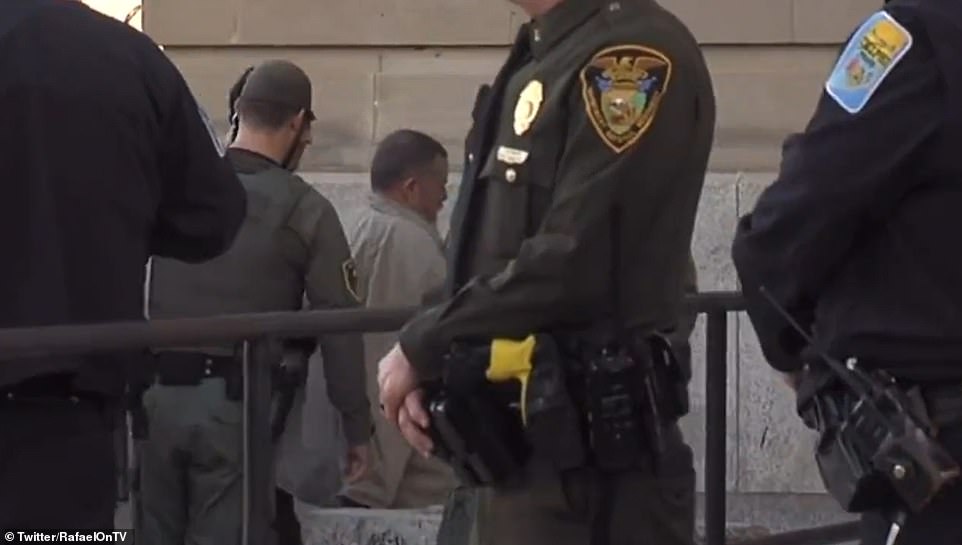 Allen, 50,  has arrived at an Indiana court ahead of a 9am hearing after his lawyers issued an application for him to be released on bail 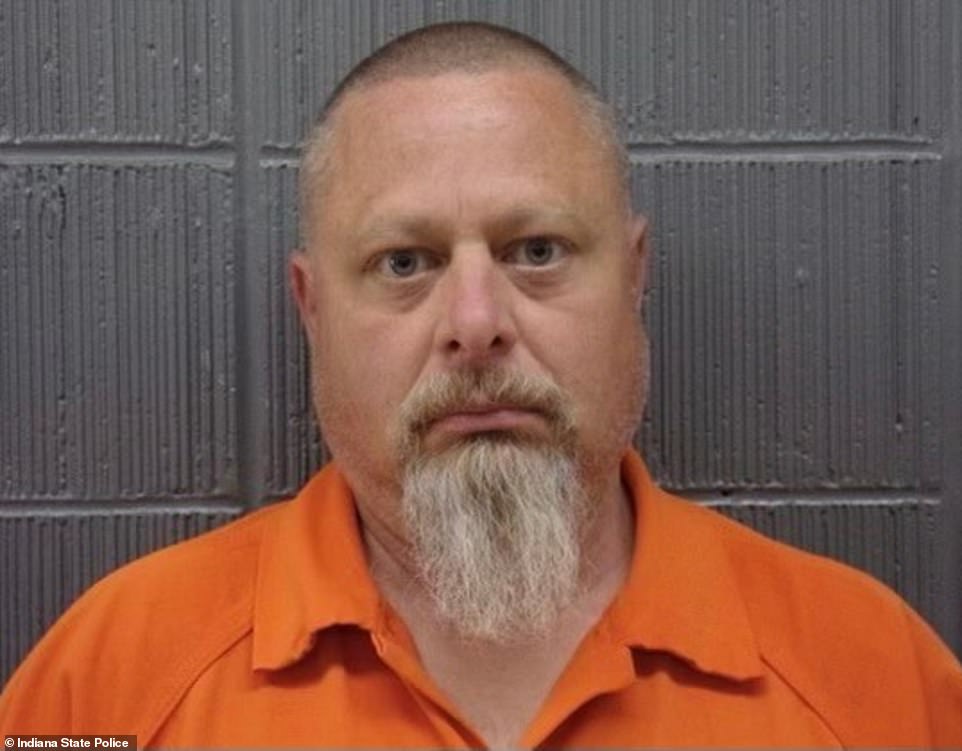 He was was given court-appointed lawyers after sending a handwritten letter to the court asking for representation last week.

New: Richard Allen accused of the Delphi murders arrives at the Carroll Co. courthouse for hearing. The judge will hear arguments about whether to unseal the affidavit detailing his arrest. A crowd has gathered outside hoping to see the proceedings which begin at 9. @wrtv pic.twitter.com/UGzazN4Ji1 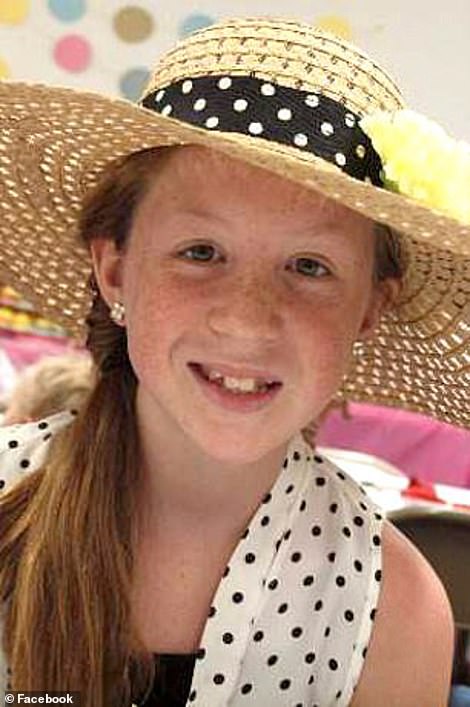 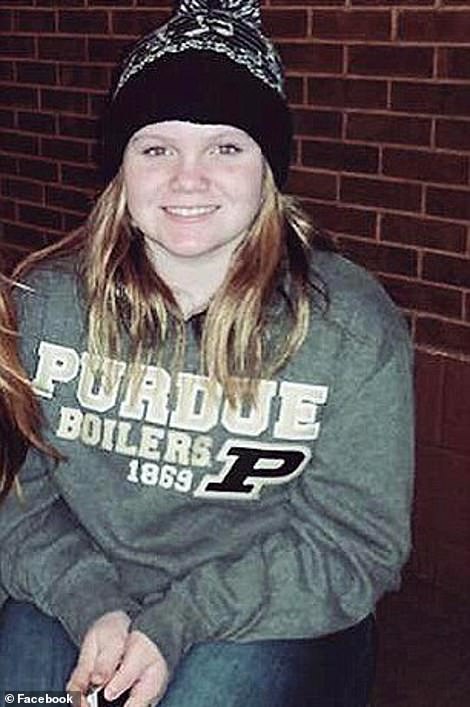 Abigail Williams, left, and Liberty German, right, were murdered in February 2017 after going for a walk along the Delphi Historic Trail near the Monon High Bridge. The culprit had remained a mystery for five years and Allen is the first to be arrested for it 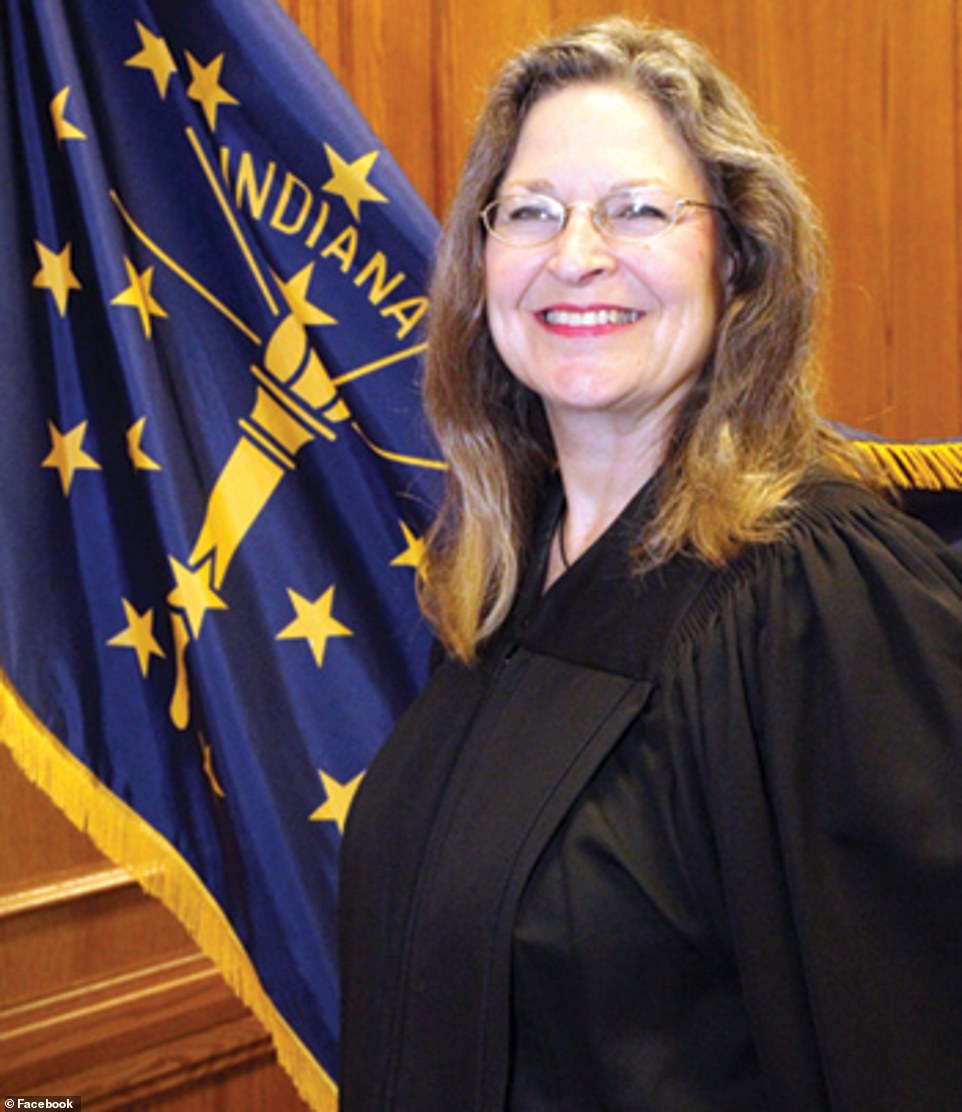 Special judge Frances Gull, a criminal division administrative judge in Allen County, could release the documents immediately after taking over the case when the prior judge recused himself

A judge will today decide whether to unseal the probable cause affidavit and charging information, as the mother of Libby has begged for it to remain under wraps.

Carrie Timmons, the mother of Libby, has also slammed Indiana State Police for not making an arrest sooner – with the CVS pharmacy technician never being named by them in their initial investigations.

Speaking to the US Sun she said: ‘If they have in fact caught this guy after six years with him living under their noses, then what were they doing all this time?” she asked.

‘That’s all I’m willing to say right now, but this could’ve and probably should’ve happened six years ago.’

Timmons added that she feels the affidavit should remain sealed, saying: ‘What’s waiting a little longer going to do?

‘I don’t want anything to happen that would jeopardize the case in any way, so if the affidavit being sealed manages to seal the deal and get a conviction, then leave it sealed.’

Or the document could be released with redactions of specific information, or choose to keep it sealed. 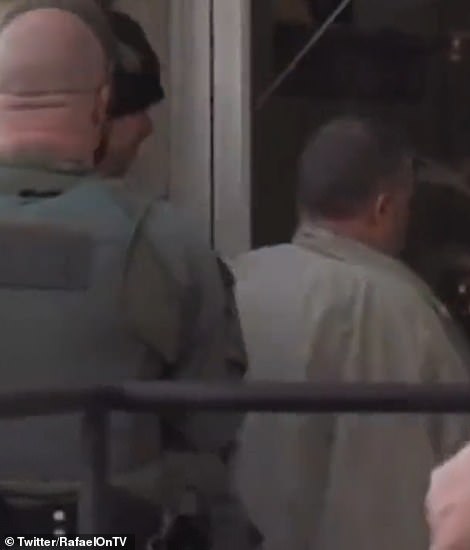 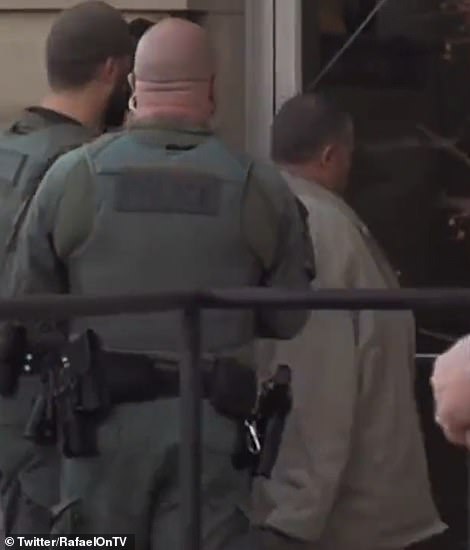 Richard Allen just arrived at the courthouse in Delphi before the hearing to decide if the probable cause affidavit used to charge him will be released. WISH-TV has full team coverage of the hearing that starts at 9 am. 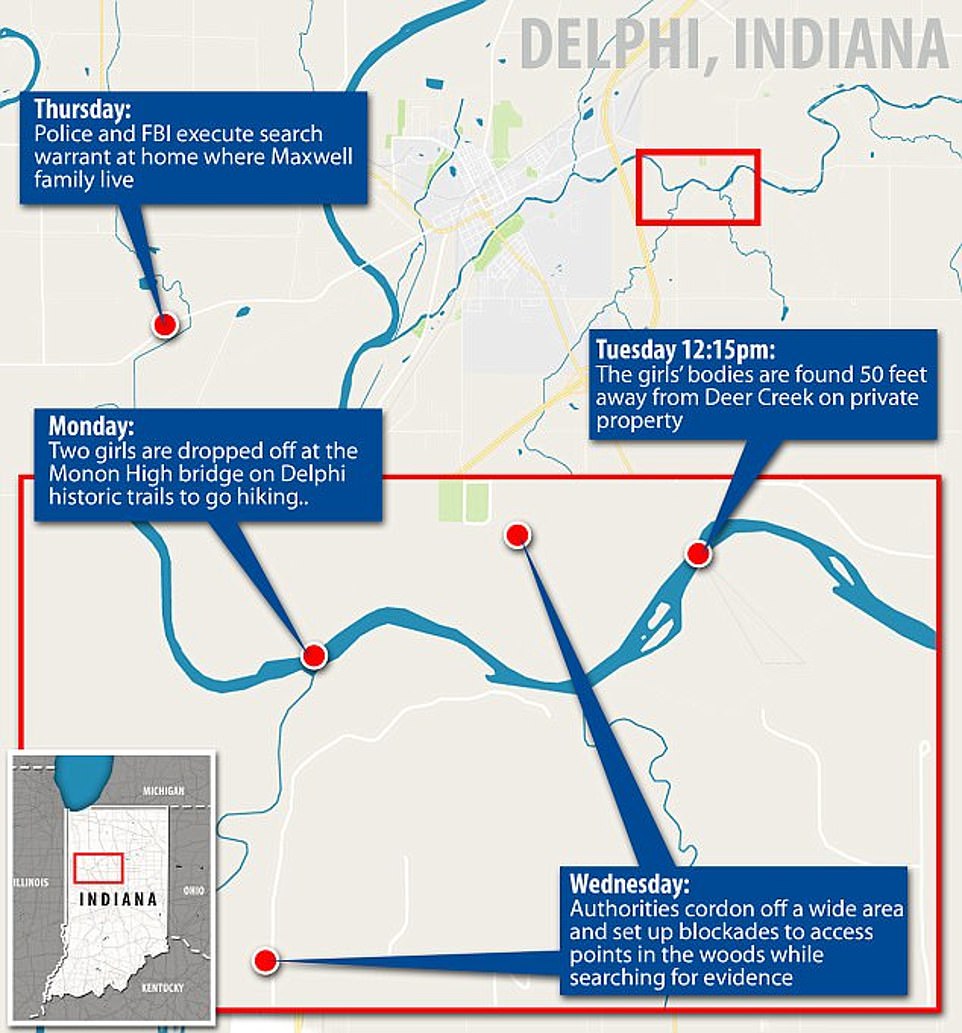 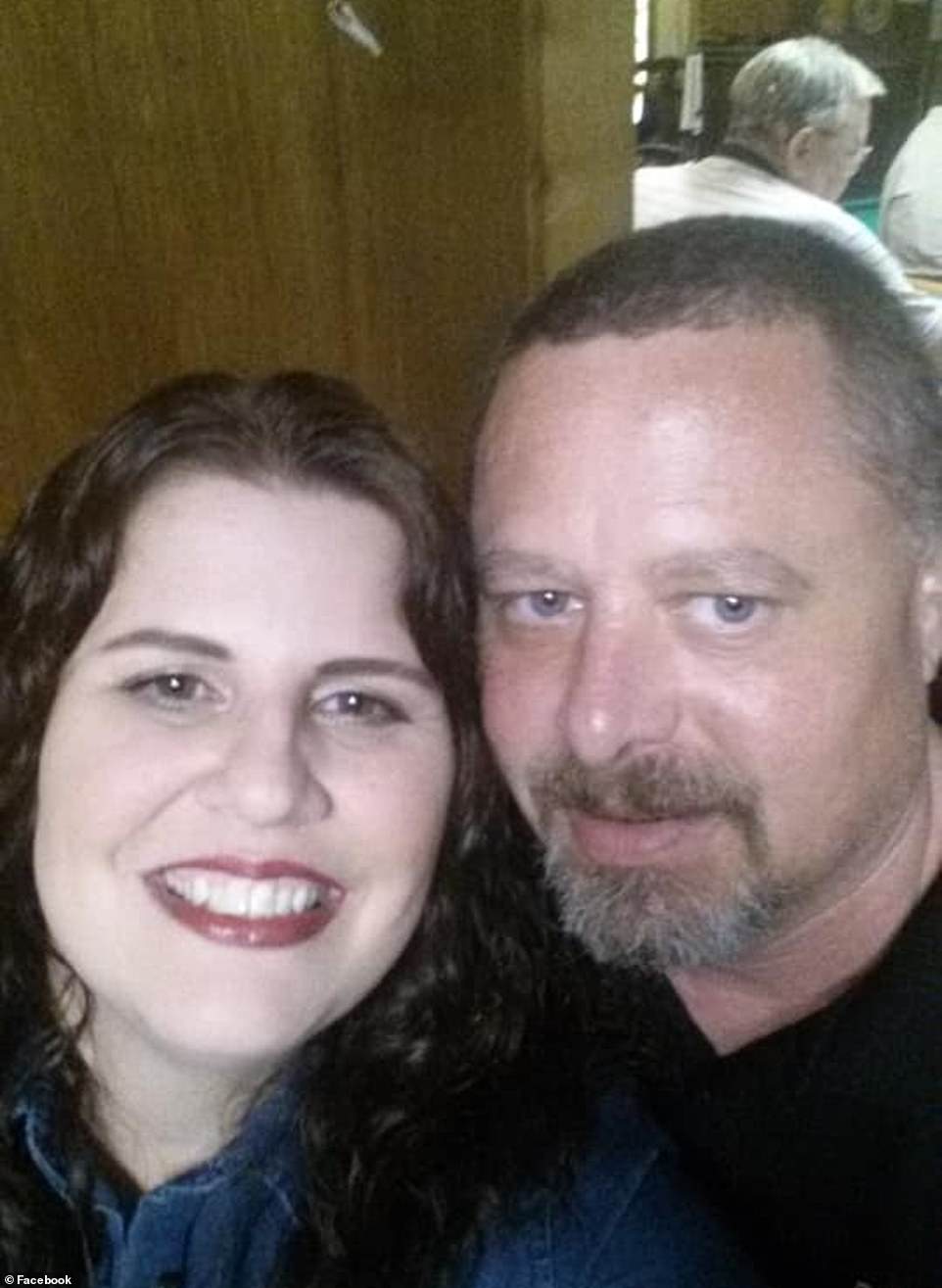 Allen is pictured here with his wife, Kathy, in an undated picture. They live just miles from the bridge from where the two teens disappeared in 2017 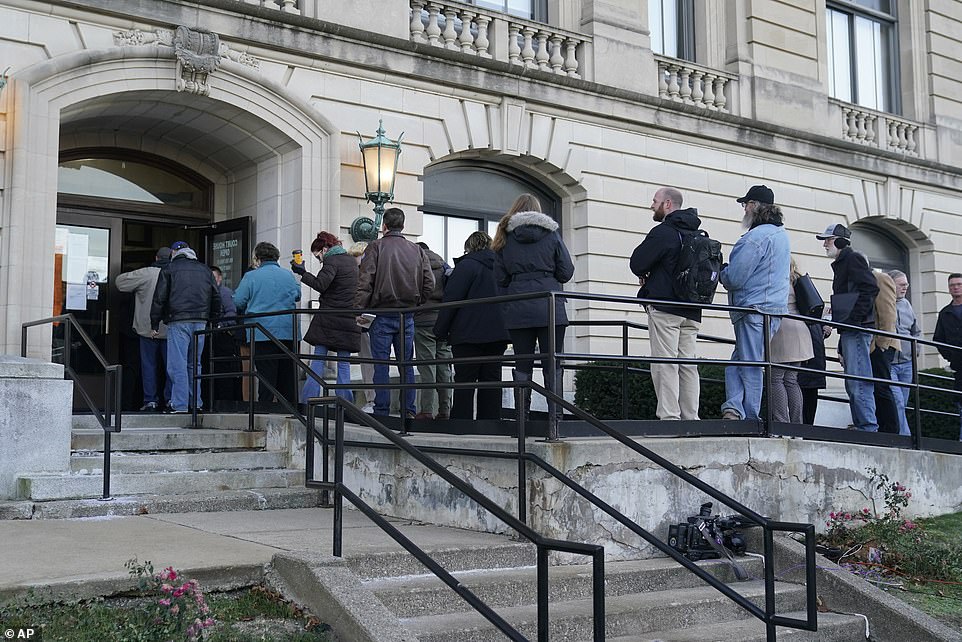 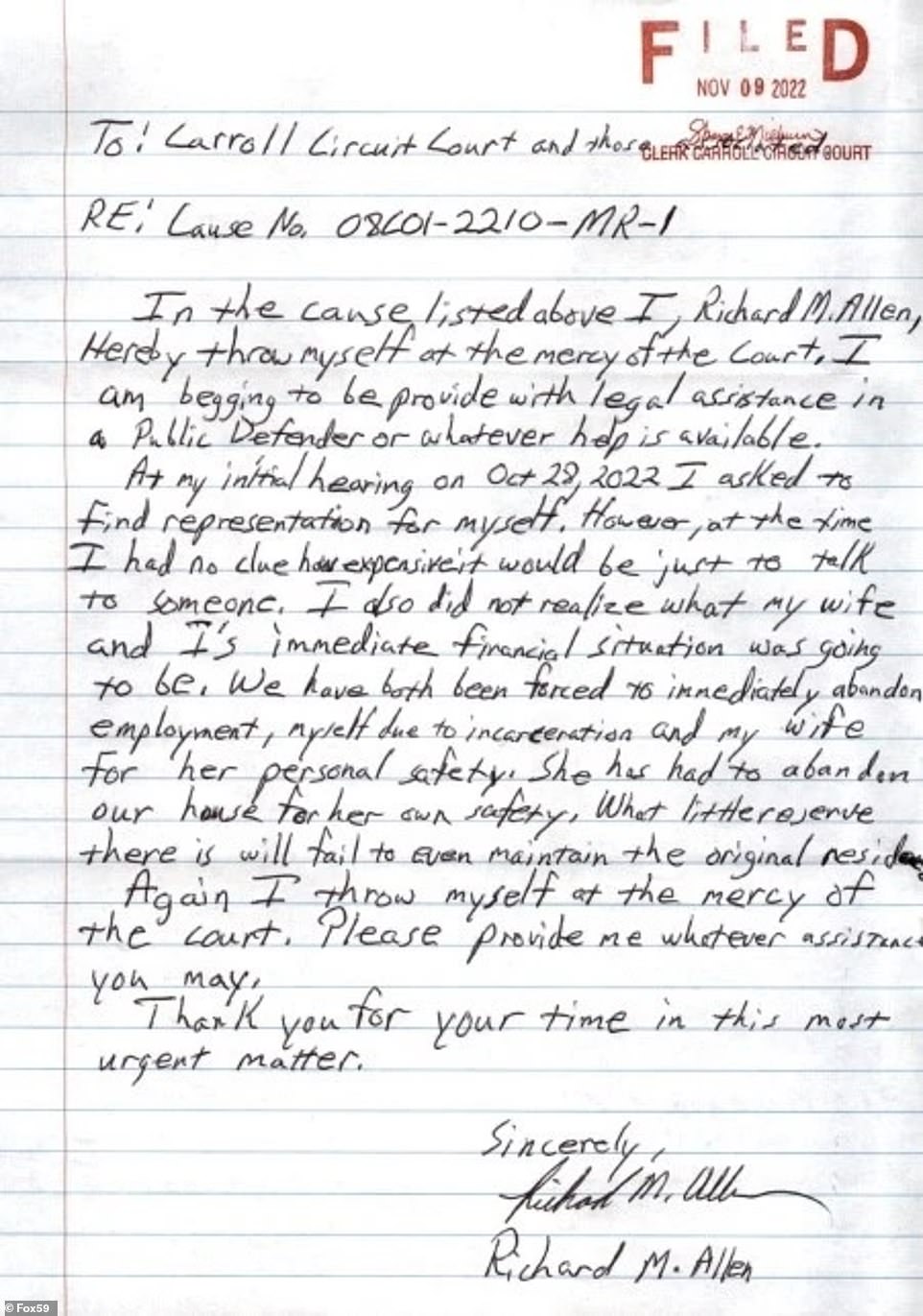 Officers with Indiana State Police are insisting that the case is still active, which leaves the door open for others to be charged.

Authorities never publicly linked him to the case before, with the culprit behind the murders remained a mystery for five years, as cops remained tight-lipped about how the girls were killed.

Judge Benjamin Diener previously gave permission for some details to be released about the case, before recusing himself from the case, again for reasons that are unclear and have not been made public.

A docket of the crimes has indicated that Allen has been charged under a specific subsection of Indiana’s statute which involves at least one underlying offense – though it is unclear what they are.

Allen has been moved to state custody for his own safety, with a court order ruling that he was in ‘imminent danger of serious bodily injury or death, or represents a substantial threat to the safety of others.’ 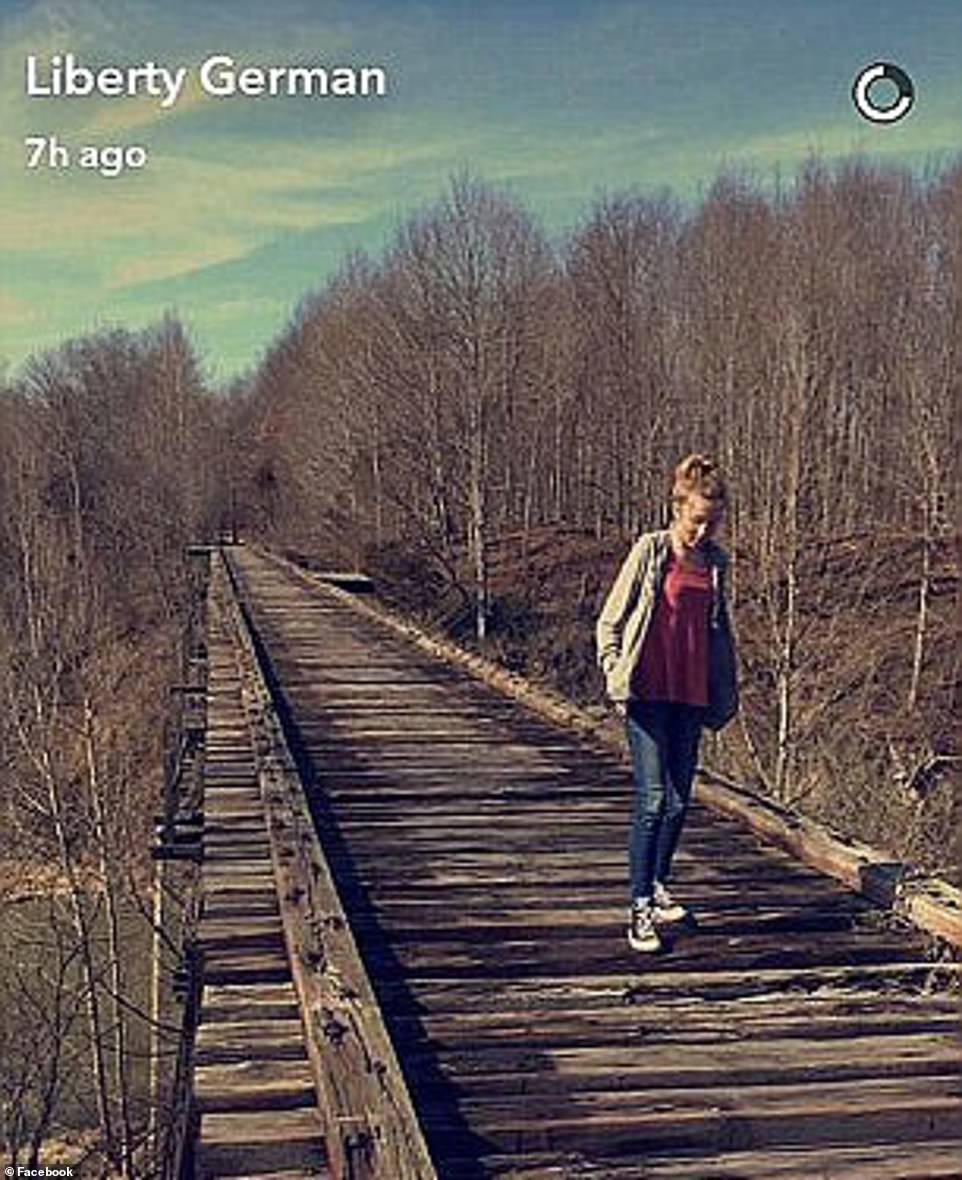 German was filmed by her friend and fellow victim Abigail Williams in February, 2017, moments before they were murdered 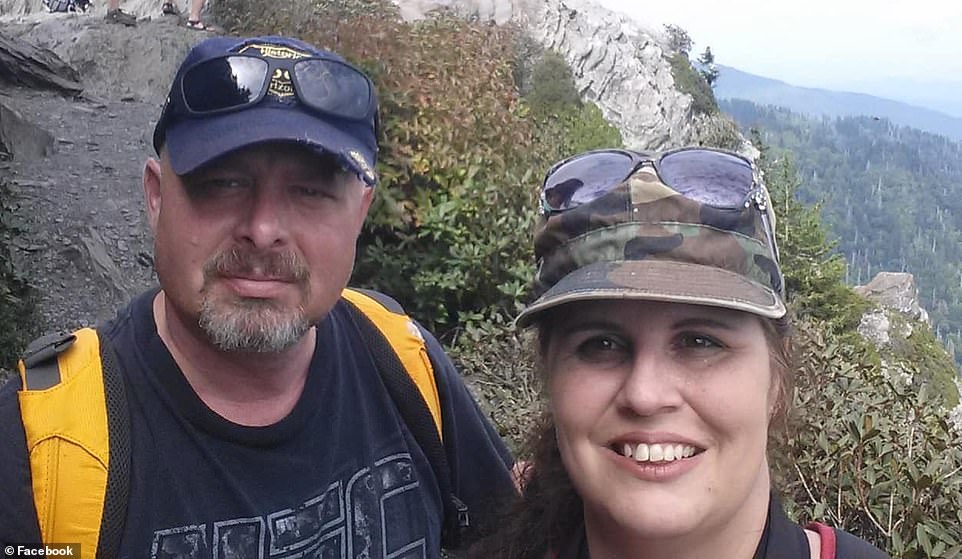 Allen is seen with his wife Kathy in an undated photo. He does not appear to have a prior criminal history and was known locally for working in the local CVS

Police reports seen by Fox 59, revealed that officers were sent to Allen’s home on 18 June 2015 at around 3.30am to reports of a ‘domestic’ incident.

Sheriff Tobe Leazenby said Allen, a dad-of-one and a CVS technician, was allegedly drunk, and his wife took him to a hospital for a medical evaluation.

Authorities confirmed that their role was to ‘keep the peace’ during the incident and no arrests or charges were filed. 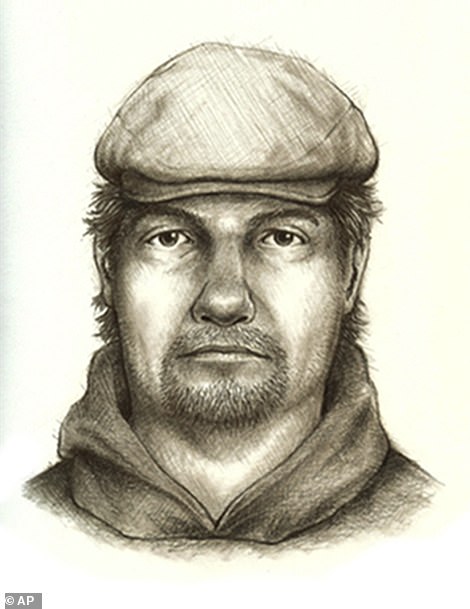 Indiana cops released Snapchat footage documented by the girls of a man following them closely on a bridge shortly before their deaths – who was dubbed ‘Bridge Guy’.

Libby and Abigail went for a walk together along the Delphi Historic Trail near the Monon High Bridge on February 13 but were reported missing when they failed to show up to meet their parents.

Their bodies were found close to the bridge the day after they vanished, with several suspects being linked to the case over the years, but no arrests were made until last week.

It is unclear if Allen is the man in the footage or the voice which uttered the phrase ‘down the hill’ recorded by Libby’s cell phone shortly before the crime.

The bridge where the girls were last seen is located just a few miles from Allen’s home — which is also just a half-mile from the middle school the two teens attended.

Libby had shared a ‘snap’ on Snapchat of herself walking along the railroad tracks on the day of her murder, with the social media updates causing a sensation that made the case one of the United States’ most notorious unsolved murders. 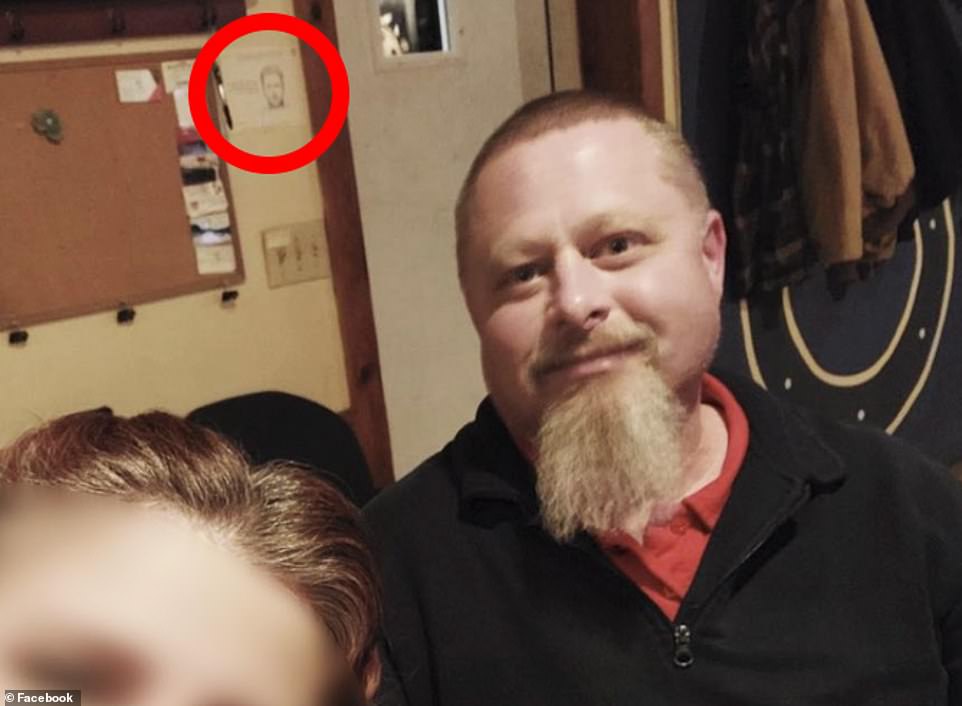 A photo shows Richard Allen, 50, smiling with his wife – while over his shoulder, a police sketch strongly resembling him is posted on the wall inside Bob Matlock’s bar 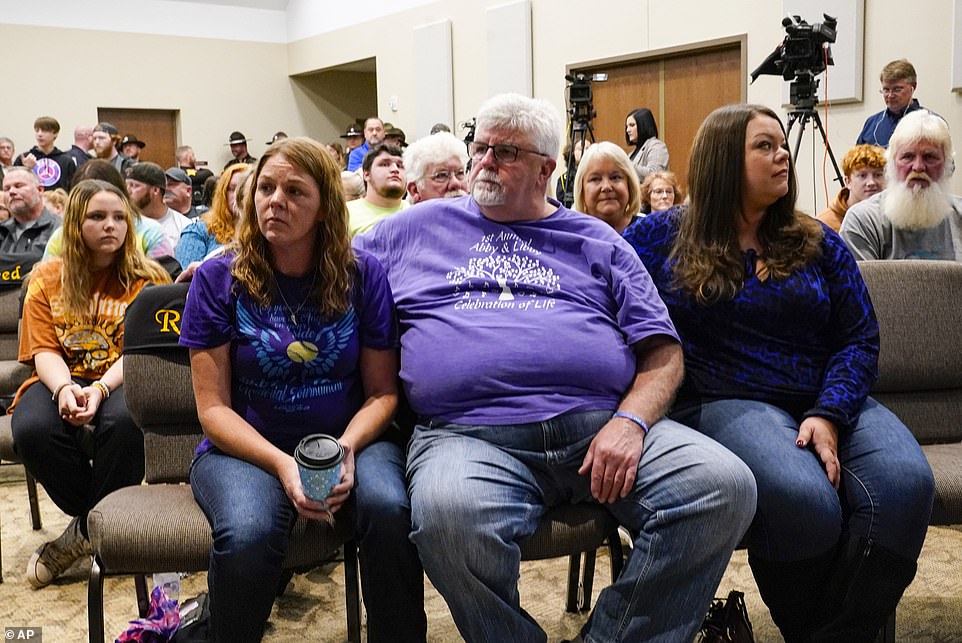 After news of Allen’s arrest broke, a disturbing photo emerged showing his own daughter posing in the same spot where the teenage victims were last seen alive.

Brittany Zapanta, 28, is pictured posing on the Monon High Bridge.

The photo was posted to Facebook by Allen’s wife Kathy, 50, in 2018 —just over a year after the girls disappeared in February 2017.

It’s unclear when the photo was taken and also no indication as to who took the snap on the Monon High Bridge Trail.

The arrest of Allen could be the end of a years-long investigation during which numerous possible leads have led nowhere, and police have remained tight-lipped about the details of the case.

Exactly how the girls died remains unknown to the public, and the state their bodies were discovered also remains shrouded in mystery.

Over the summer, the details of a search warrant revealed that Libby and Abigail were found covered in blood and that their killer appeared to have taken a souvenir of some sort from the murder site. 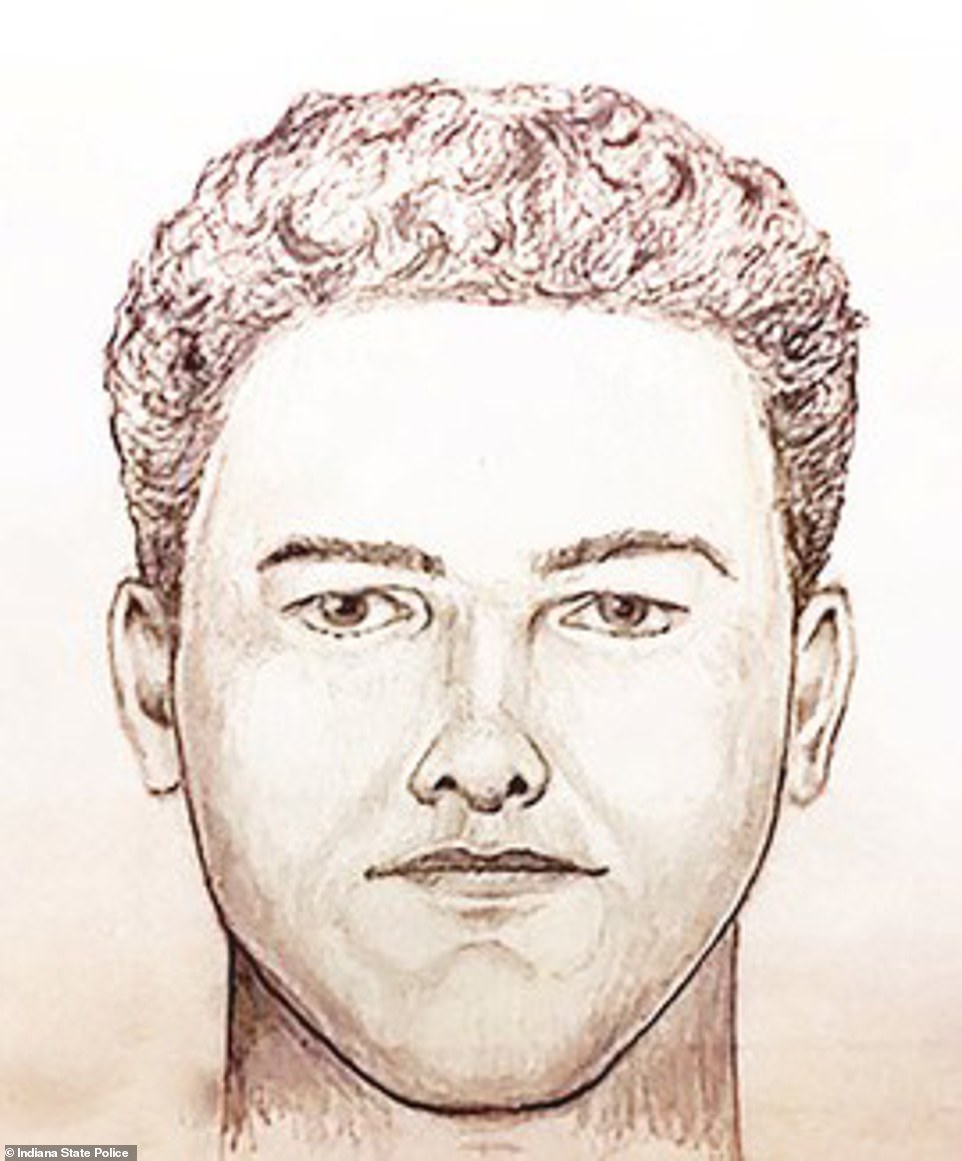 Allen was photographed sitting close to this sketch. It is one of several released following the February 2017 murders 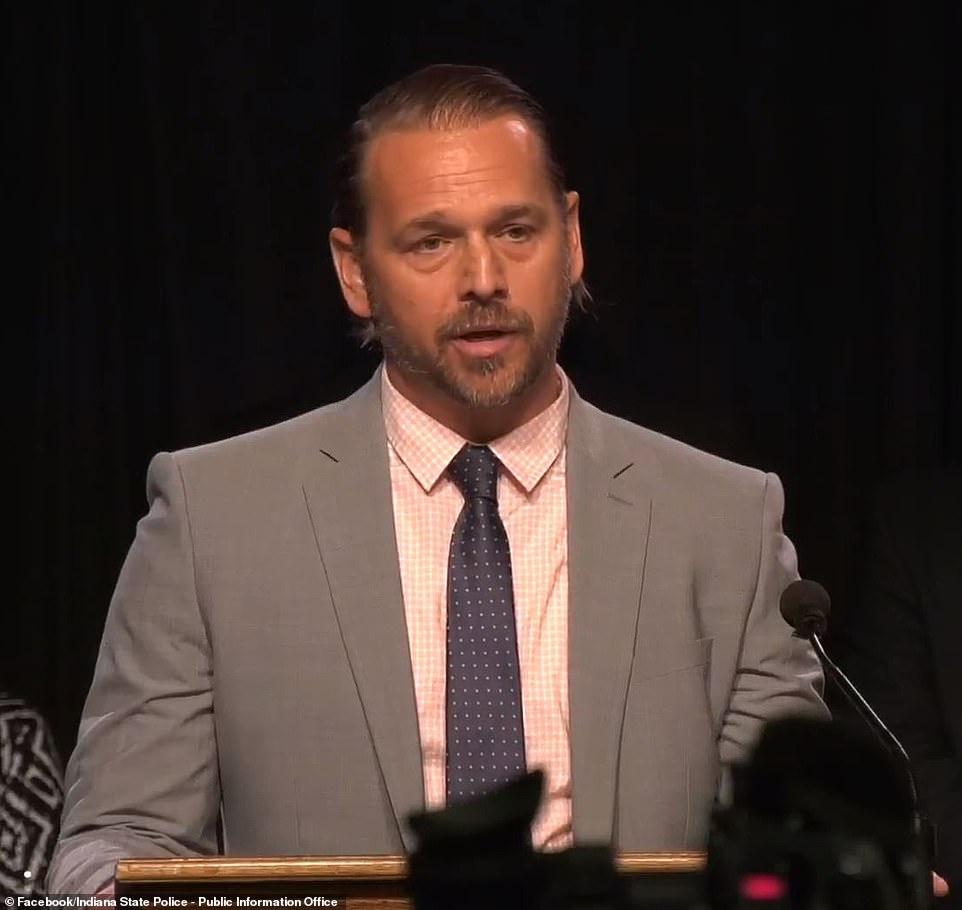 The warrant offered no further detail on what the souvenir was – although it did say that ‘the rest of [the girls’] clothing was recovered,’ implying that the killer had taken something they’d been wearing.

The murderer also reportedly ‘staged’ the girls’ bodies in a particular way after killing them – although it remains unclear exactly how he did this.

Investigators believed photographs or videos were likely shot of the grotesque set-up to ‘memorialize’ the crime scene.

Over the years numerous people have been put forth as possible suspects in the case.

Ron Logan, who died in 2020, had long been the prime suspect.

The girls’ bodies were discovered on his property – just 1,400ft from his house – and it was revealed over the summer that his alibi for the day of the murder did not line up.

His home was searched and he was arrested shortly after the killings, but he was released and never charged. 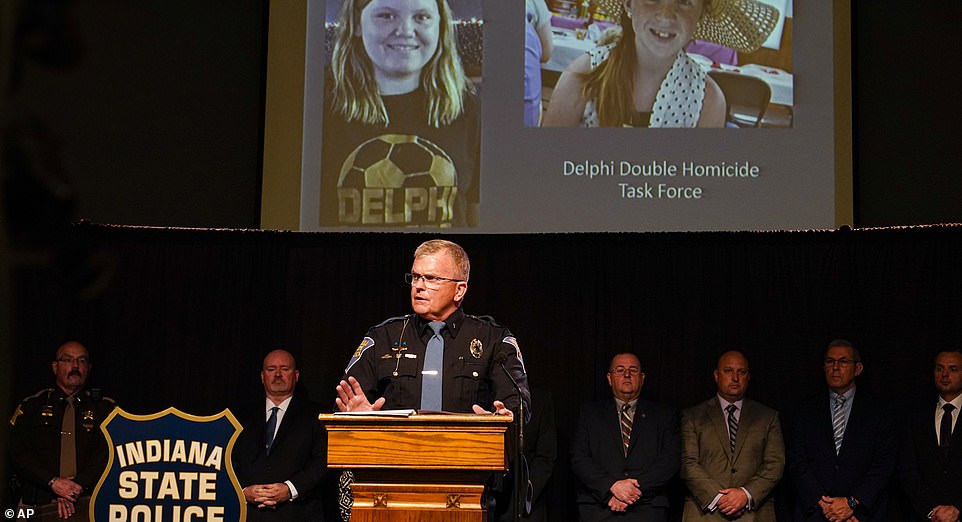 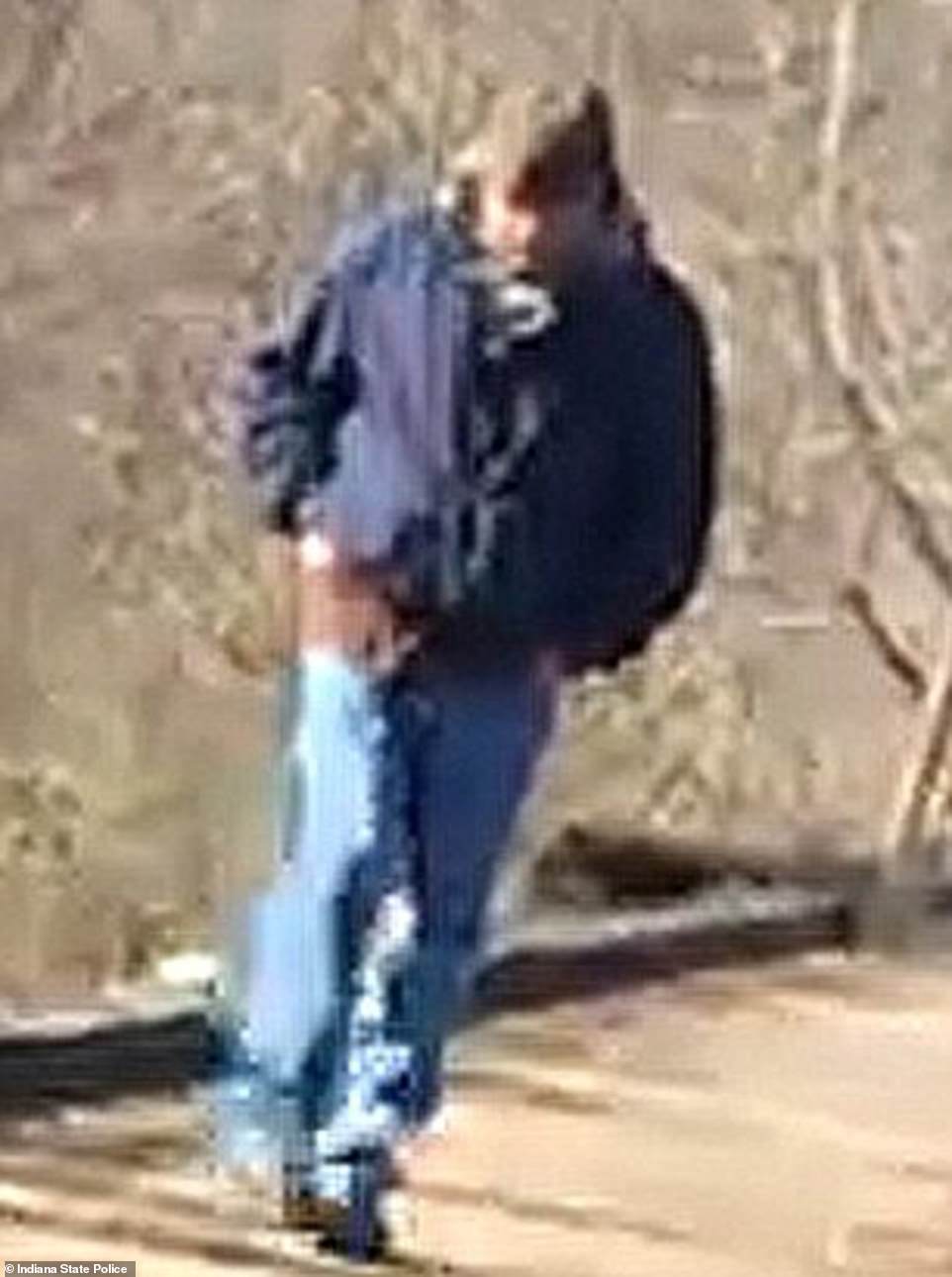 The voice in the clip was described as being ‘not inconsistent’ with that of Logan, the FBI investigation concluded.

Another man, Kegan Kline, 27, of Peru, Indiana, was also previously named as a suspect in the murders.

He is said to have admitted to talking to Libby German using a fake Instagram profile called Anthony_shots.

Kline – who is heavy-set and pasty-faced – used an image of a ripped and muscular young man to trick underage girls into speaking to him.

He is said to have arranged to meet with Libby on the Delphi High Bridge the day before she was murdered while walking along it.

But he is also said to have shared his Anthony_shots password with others – including his father – and said his father could be a prime suspect in the killings.

The Indiana State Police Department’s tip line can be reached by email at [email protected] or by phone at 765- 822-3535.