The Toyota SUV driver who crashed into a Boston-area Apple store killing a contractor claims his foot became stuck on the accelerator and he could not properly stop his car.

Bradley Rein, 53, of Natick, Massachusetts, was taken into police custody Monday night and was charged Tuesday with felony reckless homicide by motor vehicle and reckless operation of a motor vehicle.

Court records show that Rein told police on the scene that he was driving to the Derby Street Shops to replace a lens in his eyeglasses Monday morning, when his right foot got stuck on the accelerator. He said he tried to use his left foot to pry it off the accelerator, when he crashed into the building.

Rein also told investigators he did not consume any alcohol or drugs, and tested negative for alcohol on his breath.

Witnesses say Rein drove into the store at 60mph, leaving a gaping hole in the glass façade of the Apple store in Hingham, Massachusetts and many victims with life-threatening injuries.

He was only able to stop after crashing into the far wall of the store, leaving it with structural issues.

Kevin Bradley, 65, – a ‘professional who was onsite supporting recent construction at the store’ according to Apple – was killed upon impact and 19 others were injured in the crash at around 10:45 a.m.

Records show Rein was previously arrested in Vermont for driving under the influence in December 2020.

He was issued a citation for driving under the influence, but was subsequently released from Vermont State Police custody and the case was later expunged.

Rein was arraigned in Hingham District Court on Tuesday, when a judge set his bail at $100,000 and ordered that he does not operate a motor vehicle while the case is pending.

He is due back in court on December 22. 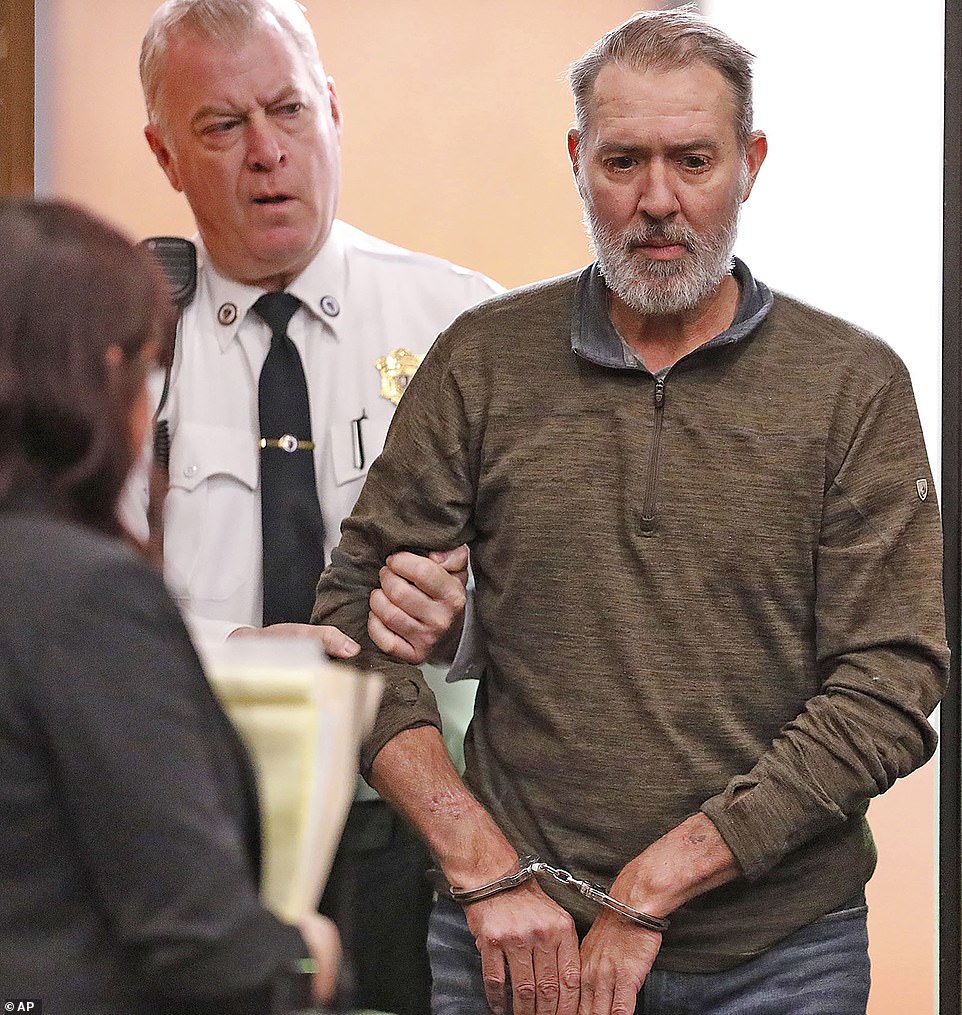 Bradley Rein, 53, has been charged with reckless homicide by motor vehicle after crashing his Toyota 4Runner into the Apple store on Derby Street in Hingham, Massachusetts on Monday 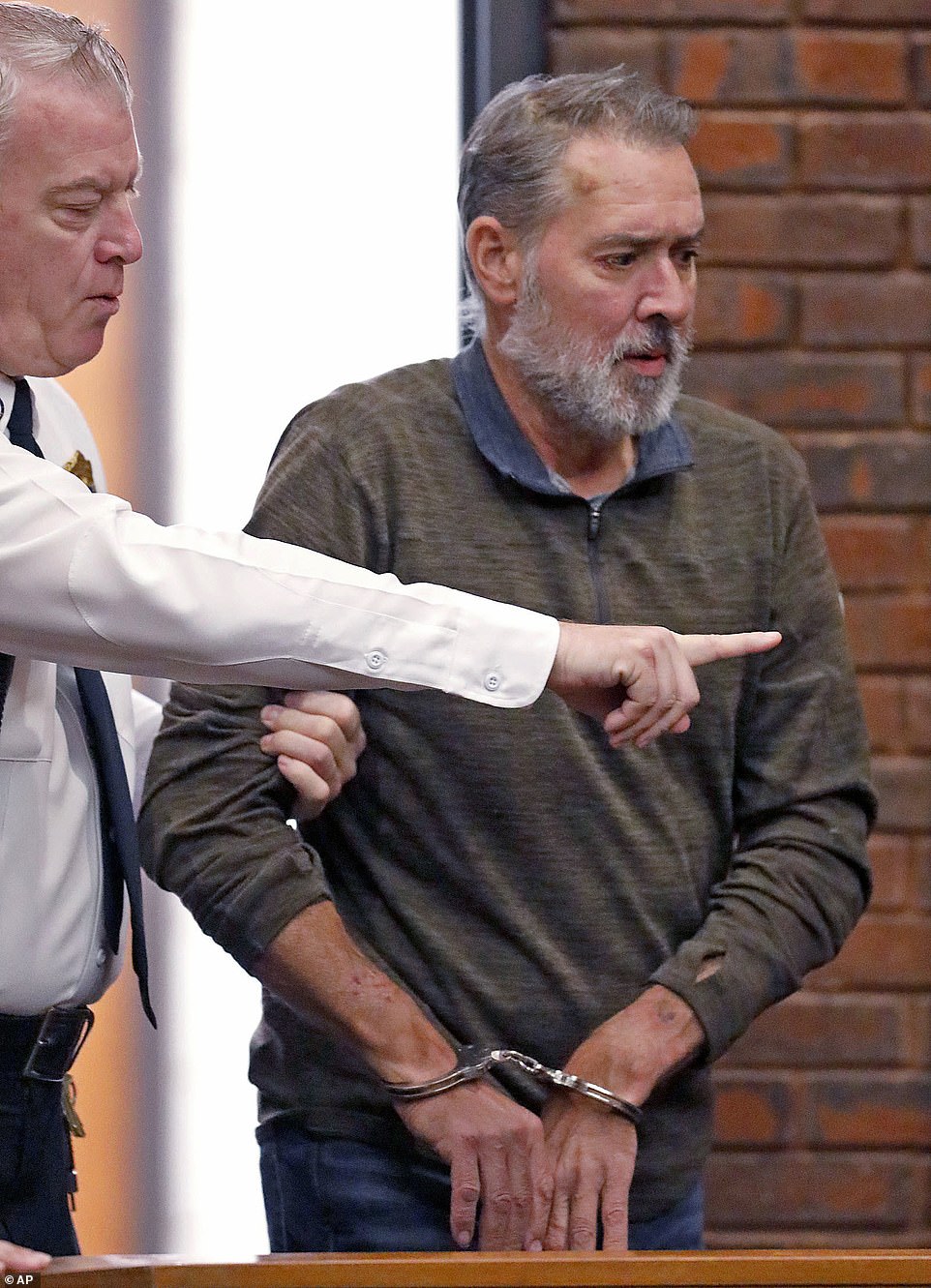 Bradley Rein, 53, of Natick, Massachusetts, was taken into police custody Monday night and was charged Tuesday with felony reckless homicide by motor vehicle and reckless operation of a motor vehicle 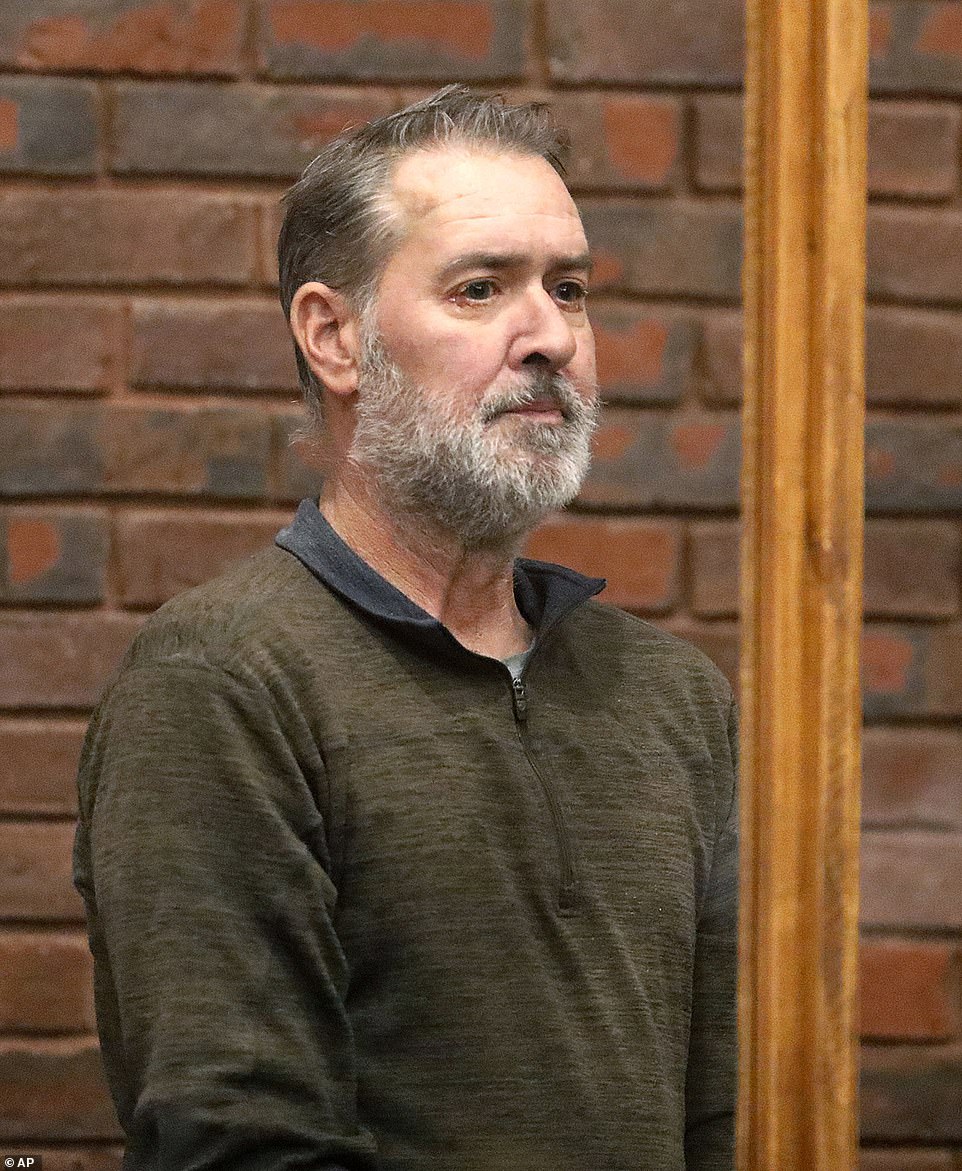 He is now being held on a $100,000 bond, and was ordered not to drive while the criminal case against him is ongoing 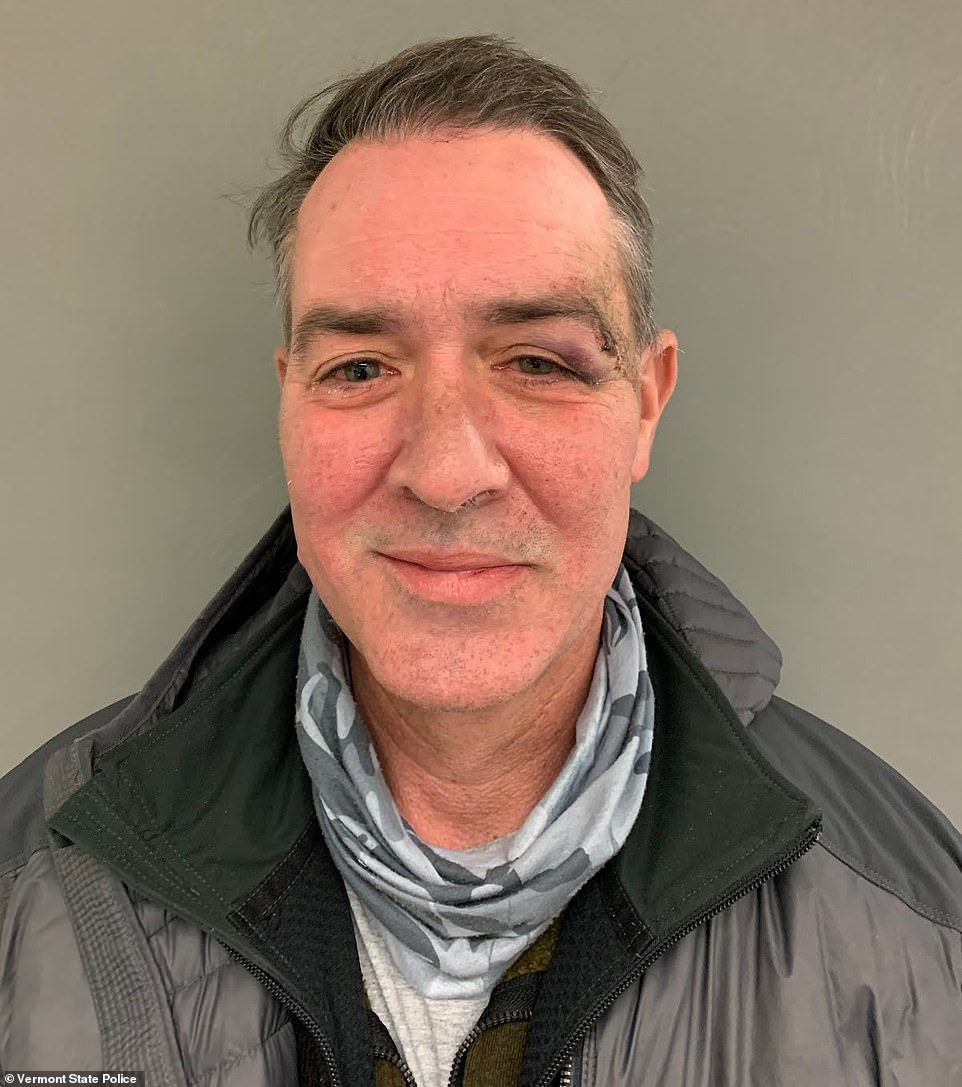 Tributes have started pouring in for Bradley, who was moving a barrier away from the Apple store window when Rein’s SUV came plowing through.

He was remembered as a good friend, father and grandfather, with Danny Letts posting on Facebook: ‘RIP Kevin Bradley. You were a good man and a good friend.

‘We will raise a glass together again someday…until then know that you will be missed by many.’

Others posted on his Facebook that they will ‘love you forever,’ and shared their condolences. 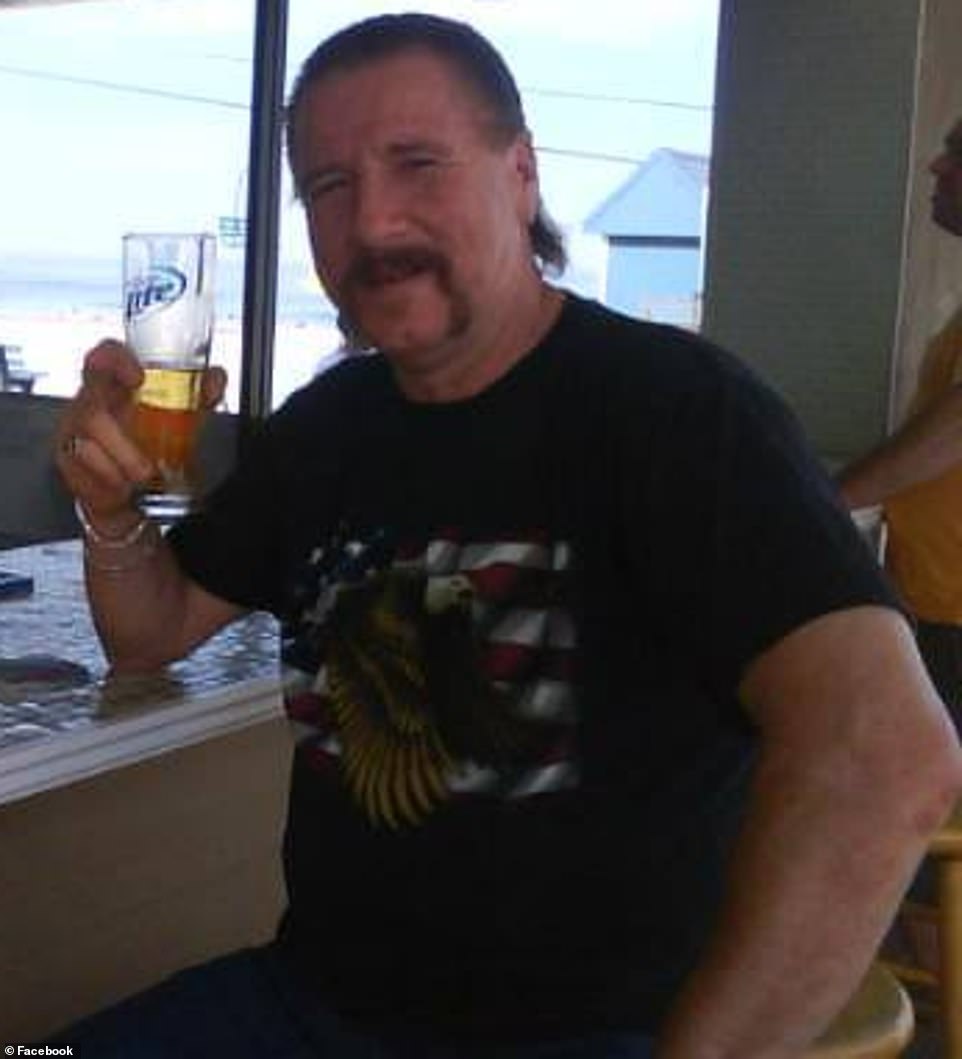 Kevin Bradley, 65, was killed on the scene of the Hingham, Massachusetts Apple store, where he had been working as a contractor Monday morning 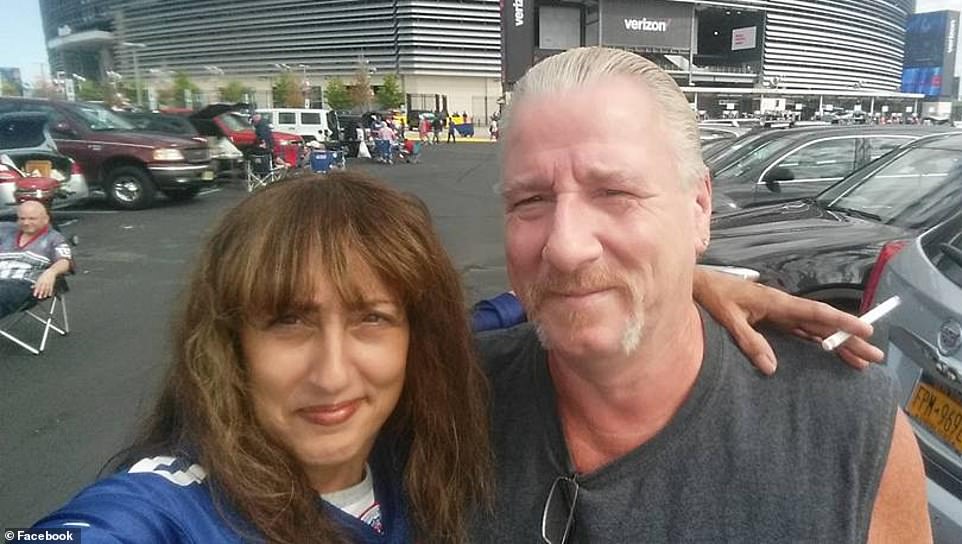 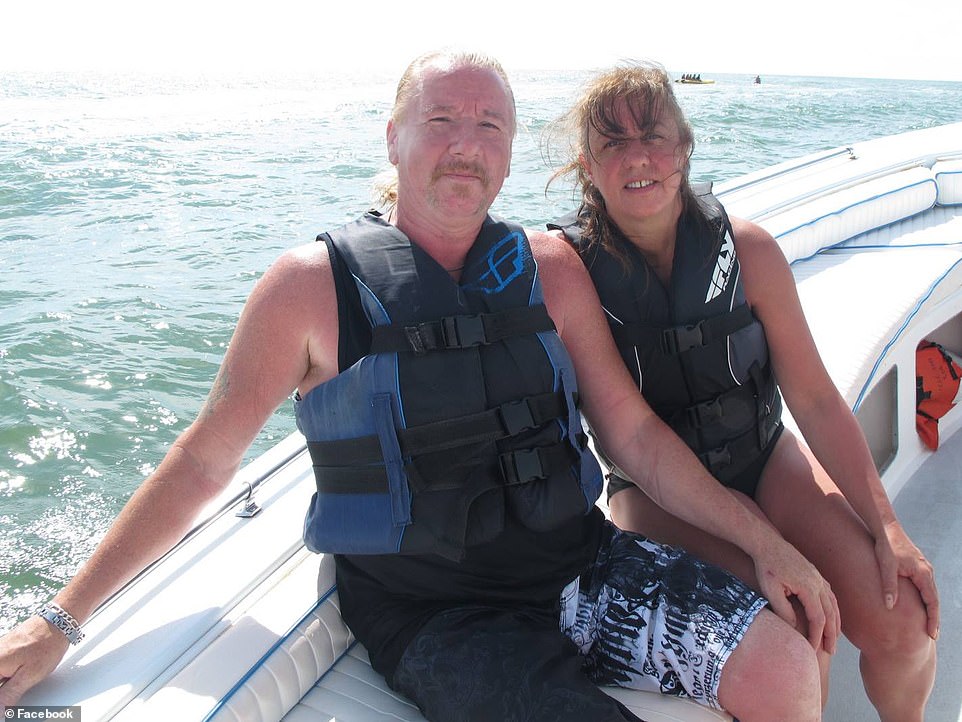 According to Apple, Bradley was a ‘professional who was onsite supporting recent construction at the store’

Authorities said they first received 911 emergency calls about the crash at around 10.45am Monday and found a gaping hole in the glass front of the store, marking where a 2019 Toyota 4Runner had slammed into the building.

When they arrived at the Derby Street store, emergency responders found ‘multiple’ people injured after they were struck by the vehicle.

Witnesses say the driver was also bloodied in the aftermath, but was alive and talking to investigators as he was pulled from the car. The vehicle was later removed from the far side of the building at around 3.30pm.

Officials say Rein was not among the 16 people taken to the hospital in the aftermath.

One other victim later drove themselves to South Shore Hospital, and two others were taken to Boston for treatment.

He added that some of the victims were taken in for surgery, and others will eventually need to be operated on. Dr. Chris Burns, the hospital’s trauma chief, also said a number of the patients sustained life-threatening injuries. 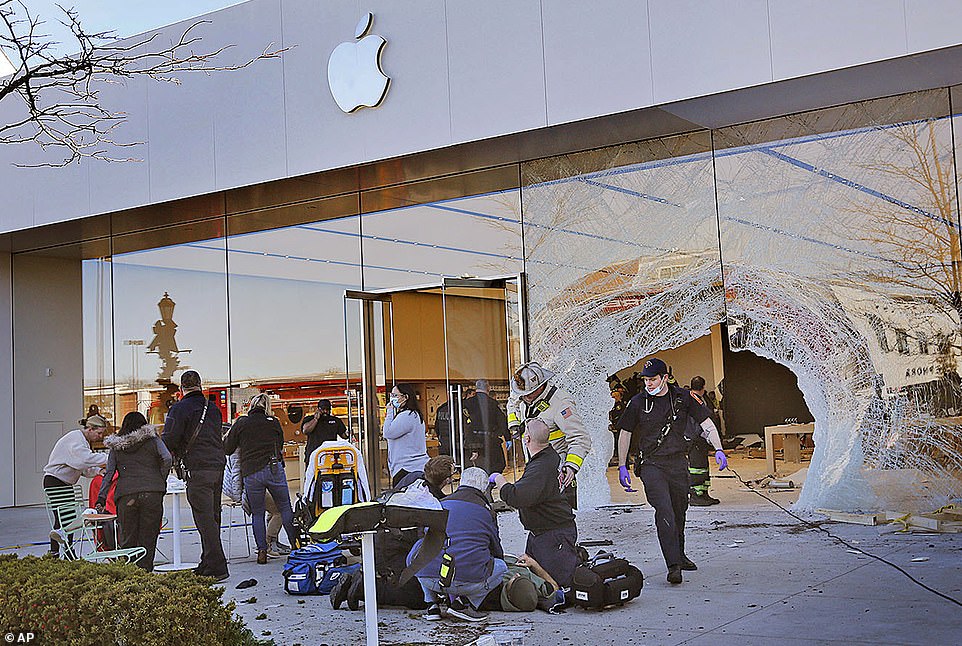 One person has died and at least 16 others were injured when an SUV plowed into an Apple Store in Hingham, Massachusetts Monday morning 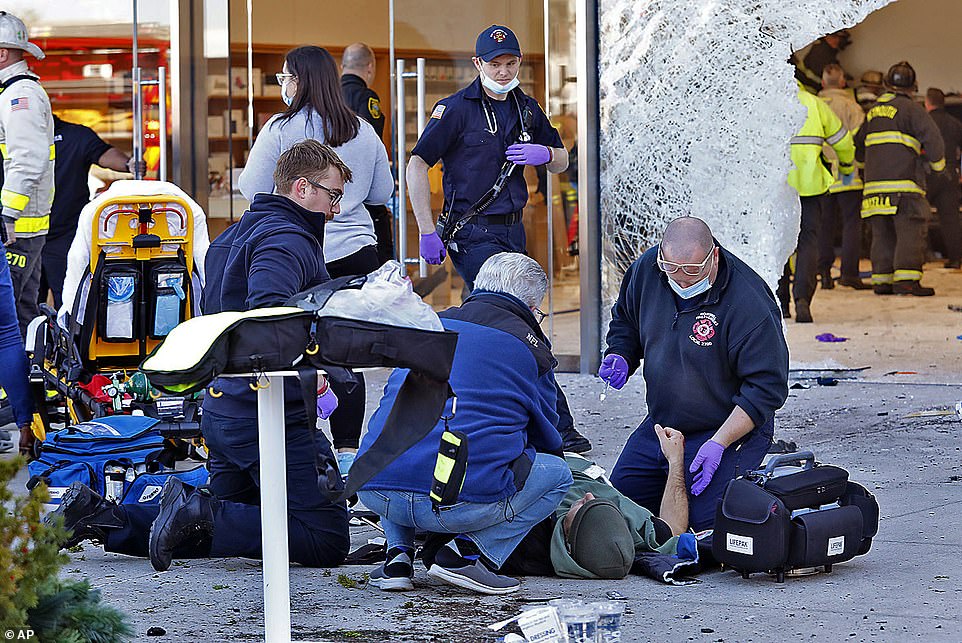 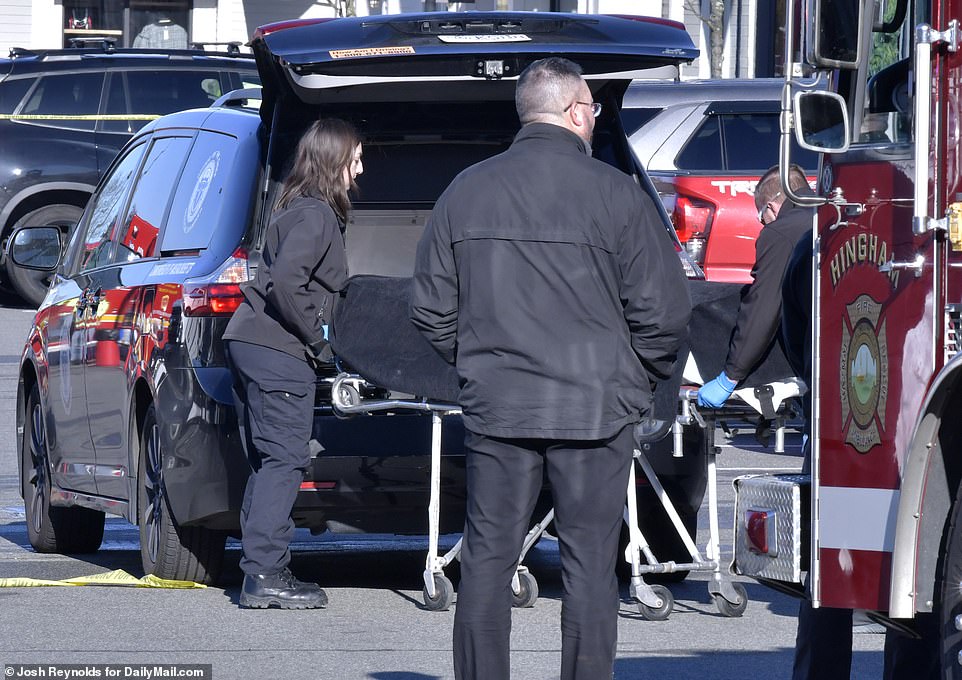 Several people were spotted being taken out of the store, located about 17 miles southeast of Boston, in stretchers.

Others were being tended to by dozens of first responders on the scene, and a medical helicopter had been called, but was later canceled.

Photos also showed firefighters tending to what appeared to be a shopper stuck under the vehicle in question as the area was blocked off with yellow police tape.

An MBTA bus was also said to be en route to be used as a triage as the scene is being treated as a ‘mass casualty event.’ 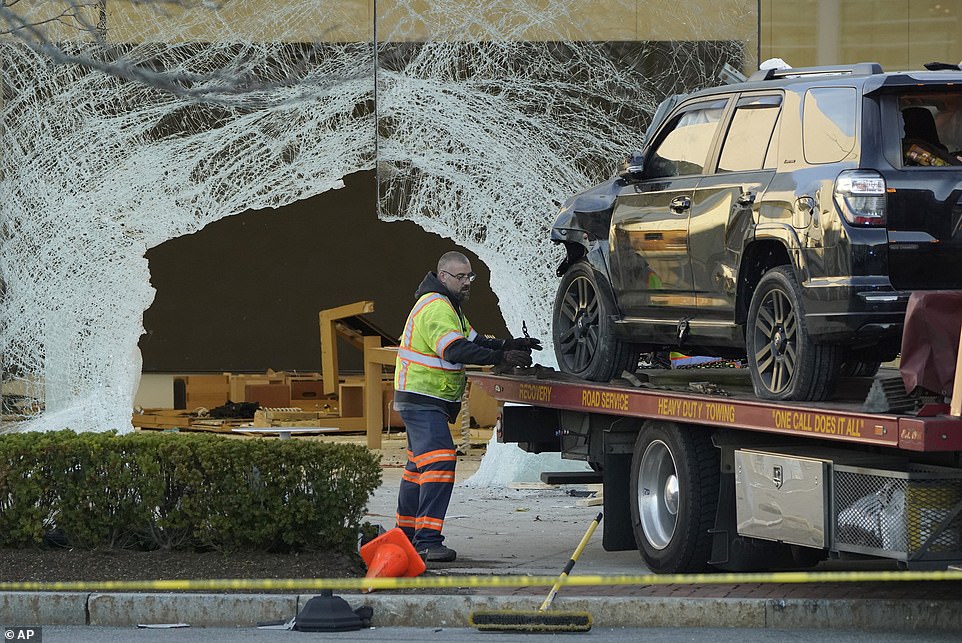 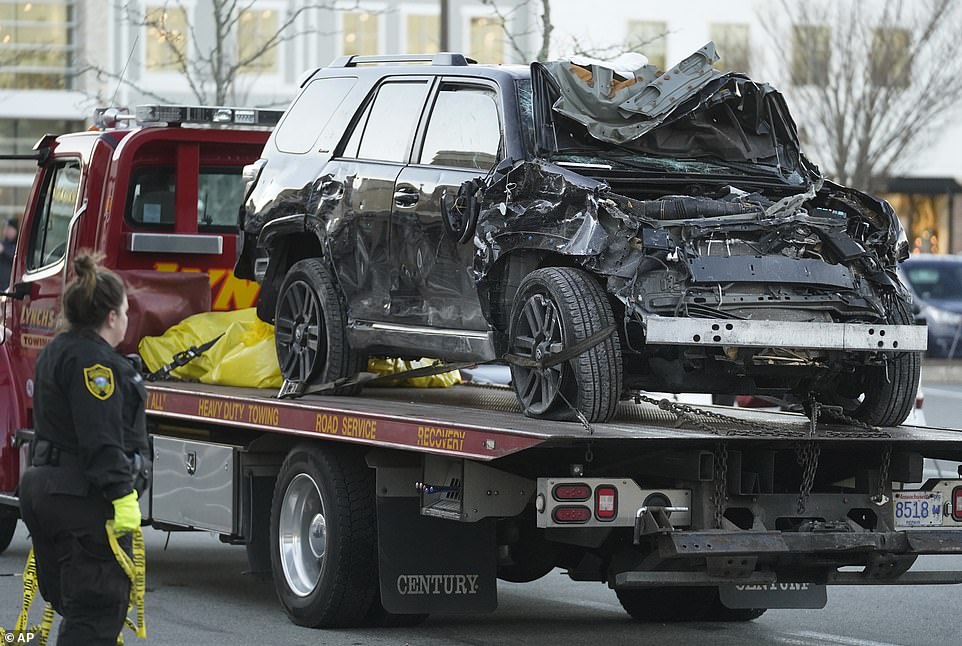 It was finally removed from the scene Monday afternoon, revealing severe damage to its front end 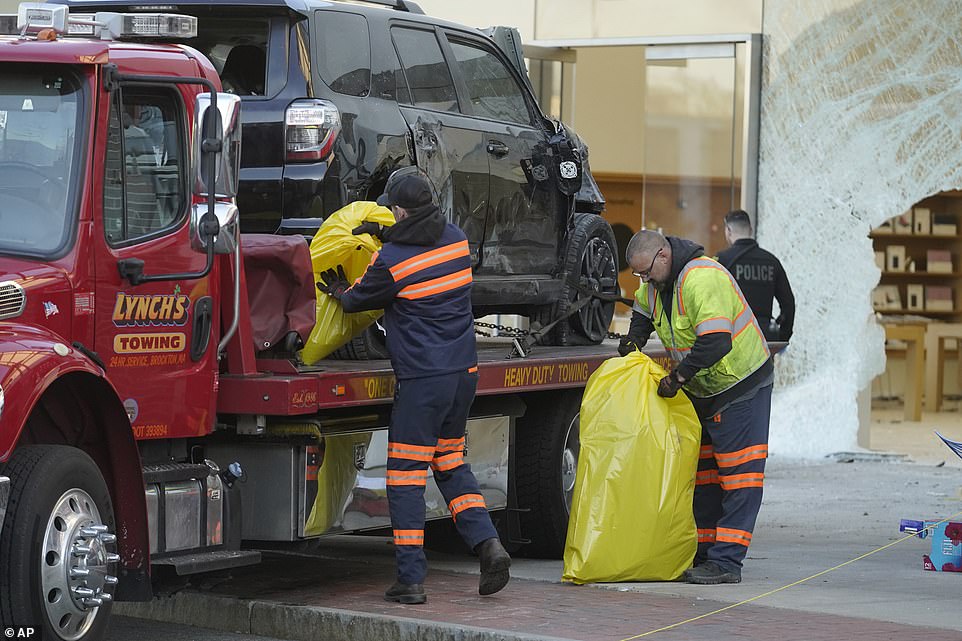 A woman who works at a store on the other side of the plaza told DailyMail.com how she heard the sirens and ran over to see what had happened.

‘It was really scary not knowing what was happening,’ Holly Roberts said. ‘And when I went to the corner and saw all of the vehicles by the Apple Store, my heart sunk.’

Witnesses also told Boston 25 News they heard a loud crash and ran over to see the vehicle inside the store on Monday morning.

‘It sounded like a bomb went off,’ Lynne Goyuk said. ‘We saw several people who should have sought medical attention, but they wouldn’t go over because they knew other people were critical.’

Emily McKenna also said: ‘I just heard glass shatter, and everyone ran to the window because they thought it was a smash and grab, and there was just a gaping hole in the middle of the Apple store.

‘I didn’t see the car drive by, but someone said it was going pretty fast, so maybe he just lost control.’

Another woman, only identified as Ann, told NECN how she heard ‘a very loud bang.

‘So we jumped up from the table and we looked out the window and we could see the hole in the Apple Store,’ she said. ‘And she had seen a car go by, so she was like ‘Oh my God, that car just went through the Apple Store.’ And that was really it.

‘We had just walked by the Apple Store to get our coffee and we decided to stop for a minute. We could’ve been walking back by… so my heart goes out to all the employees of Apple and all the customers that were in the store because nobody should be dealing with this. Nobody.’ 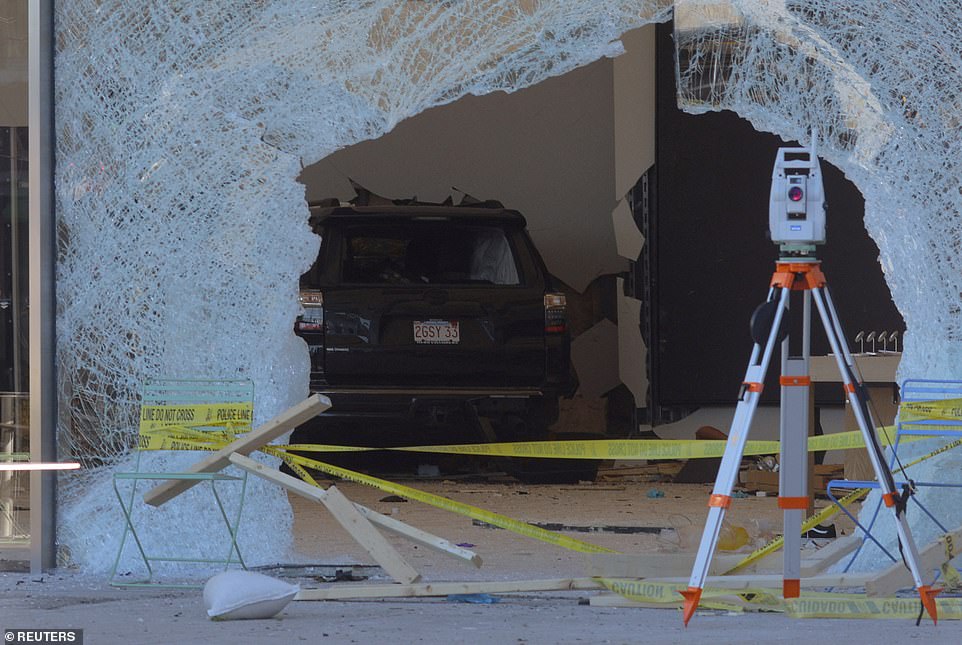 The Toyota 4Runner stopped at the far end of the store, where it crashed into a wall 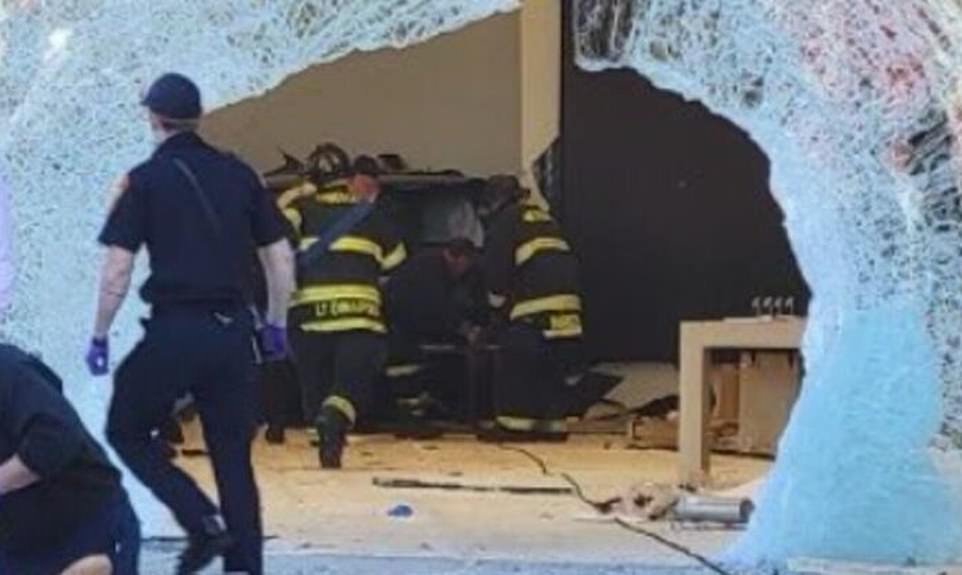 A local man also took to Twitter to share that his wife was at the store when a ‘black 4Runner drove full speed’ into the store.

‘She said there are a lot of injuries — my wife used a spare jacket as a tourniquet.’

The incident comes at the beginning of a busy holiday week, when many take off from work.

The two adjacent stores at the strip mall were also closed and taped off on Monday as police continued to investigate the scene.

Most stores were expected to reopen at 10am on Tuesday, though the Apple store will remain closed ahead of the busy holiday season.